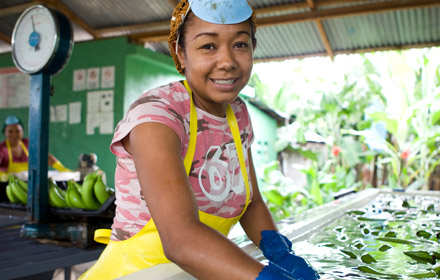 Bananas are the favourite fruit in our grocery basket and are grown by millions of small-scale farmers and plantation workers in tropical regions.

Bananas are grown by millions of small-scale farmers and plantation workers in tropical regions. They are the staple food for millions of people in developing countries and the favourite fruit in our grocery basket.

Bananas are grown both on small family farms and much larger commercial plantations. The banana industry provides employment for thousands of people in Latin America, the Caribbean, Southeast Asia, and West Africa. It generates vital foreign exchange earnings that governments depend on to improve health, education, infrastructure and other social services.

The Windward Islands, for example, traditionally earn around a fifth of their total export earnings from bananas alone. For Ecuador and Costa Rica, the figures are around 9 and 8 per cent respectively. In addition, the industry employs thousands of people in distribution networks and supermarkets worldwide.

The trade in bananas is a cornerstone of many developing countries' economies, but the social problems in the industry are many and complex. Reports about problems in the banana industry often highlight the woefully poor situation of workers: low wages, precarious employment, restrictions on the right to organise themselves and the handling of unhealthy and environmentally hazardous chemicals without adequate protection, to name a few.

For smallholder farmers dependent on growing bananas for a living, challenges abound too – with rising costs of production but stagnation in prices, and the severe impacts of changing climate and weather patterns making production unpredictable and unsustainable.

Fairtrade works to support both banana farmers and workers employed on plantations. Our vision is to work with the banana trade to create more value for producers and ensure they get a decent price and decent pay for the hard labour that goes into growing our favourite fruit.

Bananas carrying the FAIRTRADE Mark have been produced by small farmer organisations or plantations that meet Fairtrade social, economic and environmental standards. The standards include protection of workers’ rights and the environment and payment of the Fairtrade Minimum Price and an additional Fairtrade Premium to invest in business or community projects.

Our report Fairer Fruit looks at Fairtrade’s impact for banana farmers and workers around the world, and what we can do to deepen that impact.

Aimeth Fernández Angulo is a banana farmer and manager of ASOBANARCOOP, a growers’ co-operative in Magdalena, Colombia.

Alexis Martinez Palacios is a full-time worker in the packing facility of Agrosiete, a banana plantation located in Urabá, Colombia.

Dorothy Agard is a banana farmer from St Lucia, one of the Windward Islands located in the Eastern Caribbean.

Albeiro Alfonso Cantillo, known as Foncho, is a banana farmer from Cienaga, in the banana growing region of Magdalena, northern Colombia.

Plantación Martha María is a medium-size producer of banana for the export market, located in the Uraba region of northwest Colombia.

Sandra Joseph is a banana farmer from the island of St Lucia in the Eastern Caribbean.