To highlight how support for Fairtrade improves the lives of the men, women and children who produce the tea, chocolate, flowers, gold etc, we consume and to encourage shoppers to always to look out for the Fairtrade Mark

Build reputation for Fairtrade in Watford

To develop and enhance Watford's reputation as a Fairtrade Town by encouraging shops, schools, charities, churches etc to stock, promote and use Fairtrade branded products
What Fairtrade does A brief History

Fairtrade is a simple way to make a difference to the lives of the people who grow the things we love. We do this by changing the way trade works through better prices, decent working conditions and a fair deal for farmers and workers in developing countries.

Fairtrade is unique. Fairtrade works with businesses, consumers and campaigners. Farmers and workers have an equal say in everything Fairtrade does. Empowerment is at the core of what Fairtrade stands for.

Fairtrade's mission is to connect disadvantaged producers and consumers, promote fairer trading conditions and empower producers to combat poverty, strengthen their position and take more control over their lives.

A world in which all producers can enjoy secure and sustainable livelihoods, fulfil their potential and decide on their future.

Watford was declared a Fairtrade Town in 2007, joining hundreds of other Towns and Cities across the UK in a commitment to raise public awareness and participation with the sale of Fairtrade goods.

A Brief History of Fairtrade in Watford

Cllr Jill Jenkins (LibDem) proposed the Resolution to WBC that they promote and support Fairtrade on Nov 23 2004. It was seconded by Cllr Tim Williams (Con) and was passed unanimously by all Parties. Thus we achieved Goal One!

The Mayor supplied Fairtrade tea, coffee, sugar by the side of every Flavia machine in the Town Hall Offices area and the Flavia machines are only used as a supply of hot water until the contract expires

Watford Museum, supported by WBC, has supported the Fairtrade Town Campaign from the start and Sarah Priestley has used FT products in the cafe there for years. Steering group has been invited to use the Museum for many events including the Declaration of status as a Fairtrade Town in March 2007. Our Mayor Dorothy, our MP Claire, Director of Fairtrade Foundation Harriet Lamb, Civic mayor Rabi Martins and Consultant Fairtrader Extraordinaire Albert Tucker were guests of honour 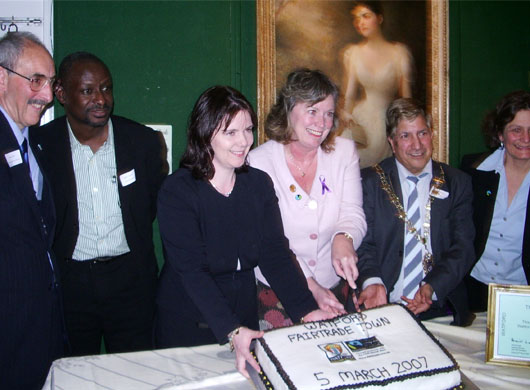 The new leisure centres, Central and Woodside, had to agree to a clause in their contracts with WBC that they supply Fairtrade products in their cafes – they offer a wide range

The Mayor and Jill have visited many of the Schools in Watford giving Assemblies about Fairtrade to students of all ages. Jill joined Steering in Nov 2004